It was a crisp Spring day I had taken a day off from work so I could finally enjoy one of the first beautiful days of the year, and I decided to take a ride down to Long Beach, so I could sit on the water, take in sun, and enjoy my precious freedom. After 25 minutes of mid-day traffic and hunting for a parking spot, I found myself feet in the sand, sunglasses on, and the Atlantic Ocean glistening in front of me.
I probably stood without moving for 10 minutes, and the beach always seemed to make time disappear. I love that tickle in between my toes of sand slipping through and the crashing of the waves has a hypnotizing effect on my brain. I finally broke the spell and began to move down the beach, looking for my plopping spot where I’d sit for the next few hours or so.
And that’s when I saw something that baked my brain. There was a man standing on the water. Standing! He wasn’t crouched down, riding a wave in to the beach. He was barely moving, and as I focused in on him, I noticed he had a long paddle in his hands. I couldn’t help but stare. 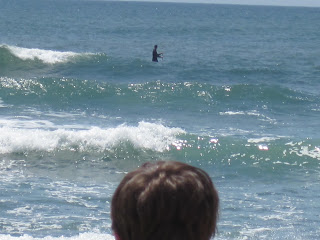 He moved at his own pace, and bobbed up and down as the waves came and went. Eventually, he turned himself onto a wave and took off, crouching into the typical surfer position, but dragging the paddle behind him, like a rudder. I watched his entire ride. It was like seeing someone drive a car for the first time.
As he approached the shore, he turned out of the wave, and paddled back out to the ocean – never once getting off the board. Surfers always bail at some point and have to make their way back – not this guy. He just went back out and again stood there, seeing the waves coming from all directions, knowing what he wanted to surf before it got close to him.  I sat there for an hour, watching this guy. I finally got up and made my way home, and the first thing I did was Google “Man surfing on board with paddle.” It returned back “Stand Up Paddle Surfing.” A new door in my life was opened. 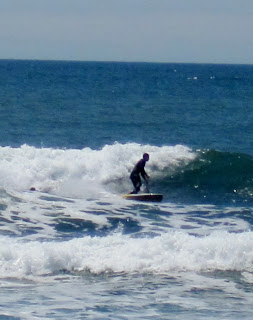 Stand Up Paddle Surfing (SUP) is the newest craze on the water. It combines the agility and balance of surfing with the control and propulsion of a kayak.  It allows people to continuously surf without having to let each wave end the run. Surfers have converted because of the versatility of the new sport. Stand up paddle boarding offers surfers the ability to catch more waves in a set, as well as offering a better view of incoming sets.
It was re-introduced to modern culture by Laird Hamilton, a surfing innovator and legend in the sport.  By being able to stand on the water, SUP surfers can control their environment more, providing for a more enjoyable experience.
On a paddle board, you can just go somewhere the surfers can’t, or won’t, go. Anywhere there is water, someone can get on a board and paddle. You can paddle out into the bays, rivers, or the ocean.
SUP allows you to go anywhere you want.