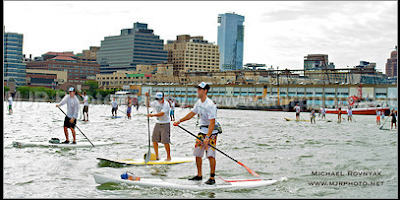 So, I participated and completed the 2010 NYC Sea Paddle on August 13th 2010. It took me about 6 1/2 hours to complete the 28 mile journey and it was one of the most excruciating and physically challenging things that I have ever done.

We started out heading North up the Hudson paddling towards the George Washington Bridge. Not too long into the trek did the G.W. Bridge appear causing me to think 'oh,, this isn't going to be too bad'. Well that damn bridge seemed to never get closer, for me, this paddle was a battle between my brain and my body. I knew from the first few miles I would have to place my mind elsewhere in order to not give into the thought that I was crazy for doing this. I thought about all the great people who donated money for the two wonderful causes (the environment and autism awareness) and sang songs in my head which seemed to help.

Finally, the G.W. bridge came and passed, there were crazy little tide pools and awkward currents near the bridge and we were advised to look out for the right turn which lead us into the Harlem River not too far after the G.W.. If missed one could end up paddling into upstate New York and the organizers warned us if this was the case we were on our own. Well for one, that turn wasn't so near the G.W. it felt like a trek all in itself. By this time the Elite Racers had caught up to where I was and blew passed me pretty quickly.

I was very impressed by the skill and mechanics of some of these Elite Racers, for one, Slater Trout who made every single paddle stroke identical to the last, keeping his 14ft SUP on track and in a nice consistent pace seemed effortless to him, which is probably why he finished in just under 4 hours and took home second place, and oh yea the kid is only 15!

After a while, I made it into the East River and thought to myself, 'sweet, I'm at the home stretch!', this was not the case, I didn't even pass Yankee stadium, I had a ways to go, I felt great making sure to take in gatorade and water before I felt dehydrated and from time to time take some bites of cliff bars.

Soon after, fatigue would come and pass, and when it came back would be a little worse than before, eventually I made it towards Hells Gate, where I took my one and only fall into the East River, the tide pools here were even worse than by the G.W.. Not too long after that (but long enough for my taste) a relief boat passed by me informing me of the outgoing tide and the river rapid like conditions I was about to encounter. This segment of the journey was without a doubt my favorite part as the currents helped take me from the 80s to the 30's (streets) in about 10 minutes. There were about 4 ft swells, which were challenging but totally fun, this is where my Paddle Surfing skill came into play. Also, the strong movements of the currents and the sight of the passing city to my left was an incredible feeling. You would pass a block then the city streets would open up with the sounds of the taxis beeping and people talking and it would disappear again only to come back with every passing block it was something I will never forget.

After that I had to battle with my sore back, I had to drop to my knees a few times to give my back and shoulders a rest, the headache came and didn't leave, the last leg was very tough and was the part where you just had to take one on the chin and motor on. Once on land, I swore off SUP forever, I never wanted to see or touch another board or paddle ever again.
I was in an awkward state of mind, elated that I completed the adventure yet pissed off and very hungry, I immediately wolfed down a few burgers and fries and felt a little better.

Now I'm excited about the possibility of beating my time next year! Thanks to the organizers and everyone who donated, c ya next year!
Posted by Reid at 8:46 PM